As former Prime Minister Atal Bihari Vajpayee breathed his last on 16th August at AIIMS in New Delhi, people in Odisha fondly remember his contribution as PM for the state.

While the Vajpayee-led government conceived the idea of having six AIIMS in different parts of the country, he laid the foundation stone of AIIMS Bhubaneswar on July 15, 2003. The institution has already made a mark as an apex centre of healthcare in this part of the country.

Vajpayee also had laid the foundation stone of the Indian Oil Corporation’s Paradip oil refinery on May 24, 2000. PM Narendra Modi inaugurated the Rs 35,000-crore project on February 7, 2016. The East Coast Railway was carved out as a separate railway zone with its headquarter in Bhubaneswar during Vajpayee’s prime ministership.

Debendra Pradhan, who served as minister of state for surface transport in Vajpayee government, said Odisha has also immensely benefited from Vajpayee’s dream of Golden Quadrilateral road network, connecting Delhi, Mumbai, Chennai and Kolkata. Around 400 km of the road passes through Odisha connecting Berhampur and Balasore.

Union tribal affairs minister Jual Oram, who also served in similar capacity in Vajpayee’s cabinet, recalls how the NDA I government led by Vajpayee carved out a separate ministry for tribal development. “As PM, he gave me a free hand and to do the best possible for development of tribals in the country,” said Jual who attended a prayer at Ram temple in Bhubaneswar wishing long life for the former PM. 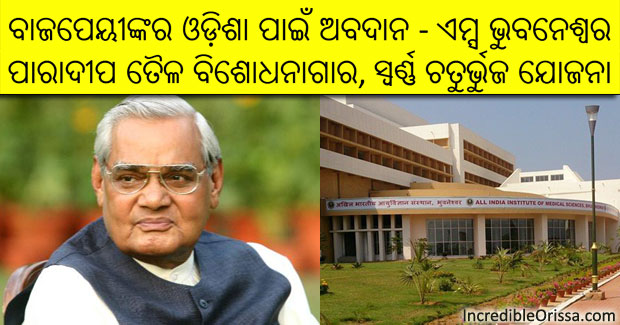