As per the Bollywood Hungama report, “the movie in question is reportedly titled ‘Izhaar’ and it was a film that Bhansali wanted to do with SRK around four years ago. It’s a love story about an Indian guy who cycles to Norway for his love.”

Pradyumna Kumar Mahanandia usually referred to as Dr PK Mahanandia, Odisha-born Swedish artist famous for his 4 months and 3 weeks journey by a second hand bicycle from New Delhi to Gothenburg in 1977 to meet his love Charlotte Von Schedvin.

A poor guy meets a rich girl. They fall in love. Girl goes back to her country. Boy promises to make it big and visit her. Time passes but he struggles to make both ends meet. He decides to fulfill his promise – picks up a cycle and sets on a journey across 8 countries to meet the love of his life!

No, this isn’t the story of an upcoming Bollywood movie. Although it pretty much qualifies to be one! This is the story of Dr. Pradyumna Kumar Mahanandia from India and Charlotte Von Schedvin from Sweden and it has all the elements of a Bollywood blockbuster – emotion, drama and lots of love.

PK Mahanandia was born on 1949 in an Odia weaver family, in Kandhapada village of Athmallik Sub-division in the district of Dhenkanal, Odisha, India. He attended the Mahendra High School, Athmallik and then joined Visva-Bharati to study art, despite his selection at the art school, it became impossible to pay the fee and he had to return home. He later joined Government College of Art and Crafts Khallikote, Odisha to study art. To satisfy his quest for art he joined College of Art, Delhi to study Fine Arts in 1971.

While studying in Delhi College of Art, he shot into fame as portraiture by drawing the portrait of Indira Gandhi. He sought permission from the authorities to sit under the holy fountain at Connaught Place and draw portraits. It is here that he met Charlotte. Know more about the love story 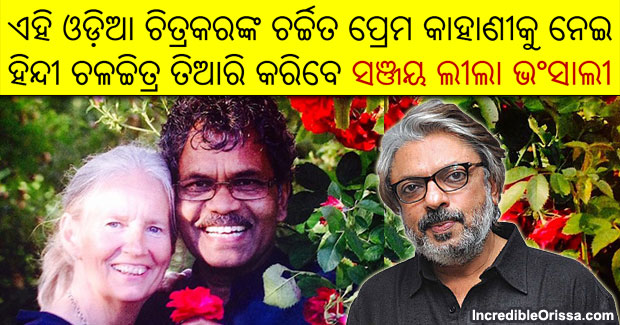