The doyen of Odia literature Chandrasekhar Rath on Friday passed away at the age of 89. He died of old age ailments at a private hospital in Bhubaneswar.

He was recently selected for Padma Shri by the Union government this year for his contribution towards Odia literature. He was survived by his wife, three daughters and a son.

Rath, a prolific writer, has written several novels, short stories, essays and poems during his illustrious career. He has earned many accolades for his thoughtful writings on different issues. His literary works touch the hearts of his readers.

Born on October 17, 1929 at Malapada village in Balangir district, the writer was nominated for the prestigious Padma Shri award this year. Rath was conferred with several awards, including Kendra Sahitya Akademi Award, Odisha Sahitya Akademi Award and Atibadi Jagannath Das Samman, for his contribution in the field of literature.

A trendsetter in Odia prose, Rath has written several novels, short stories along with penning poems to earn many accolades during his illustrious career. His notable writings include – Anek Banya Pare, Samrat O’ Anyamane and Mo Ghara.

ALSO READ: Swayam Prakash Pani of Odisha is the new IG of Kashmir 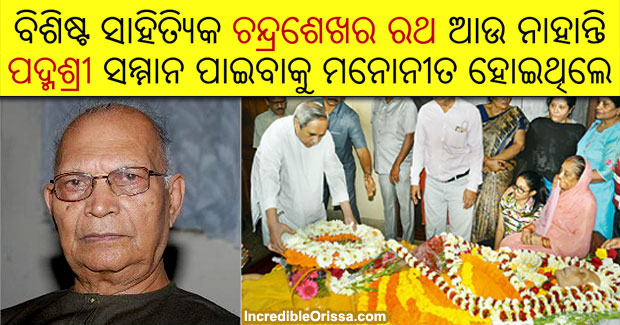