Watch this comedy episode of News Room Tamsha based on recent Rasagola origin battle between an Odia and Bengali sweet-shop owner in holy town Puri.

West Bengal government has claimed ‘Rasagola’ as the state’s invention through the GI route at a time when the famous sweetmeat finds itself at the centre of a debate as to where it originated.

Odisha also claimed that Rasagola originated from the Jagannath Temple in Puri, where it is a part of the religious rituals, and has been a part of the same since the 12th century.

WATCH NOW: Funny video on how Sarathi Baba is spending time in Jail 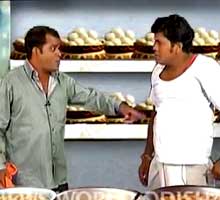