The Election Commission announced a nine-phase poll for the 16th Lok Sabha from April 7 to May 12. The counting of votes will be taken up on May 16.

The model code of conduct has come into force with immediate effect. The Lok Sabha has a strength of 543 (excluding two nominated members) and the term of the present 15th Lok Sabha ends on May 31.

Announcing the poll schedule at a crowded press conference in Vigyan Bhavan, Chief Election Commissioner V.S. Sampath, who was flanked by Election Commissioners H.S. Brahma and S.N.A. Zaidi, said Bihar and Uttar Pradesh will have the maximum of six phases polls each, followed by Jammu and Kashmir and West Bengal five phase poll each. It will be three phase poll in Jharkhand, Chhattisgarh, Assam, Madhya Pradesh and Maharashtra, two phases in Andhra Pradesh, Manipur, Odisha, Rajasthan and Tripura. All the remaining States and the Union Territories wil have a single phase poll. 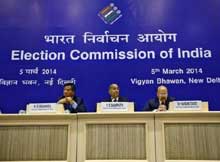 These polls are expected to be one of the most fiercely contested, with the BJP looking to wrest power from the UPA government beleaguered with strong anti-incumbency.