Odisha boy Abinash Mishra received the National Bravery Award for 2015 in a ceremony in New Delhi. He will also participate in the Republic Day parade.

Abinash received the award from Prime Minister Narendra Modi in the national capital for his extraordinary acts of bravery. The 12-year-old had fearlessly jumped into the Kushabhadra river to save a friend.

This year, twenty-five children – three girls and 22 boys, were awarded, including two posthumously, from across the country for their extraordinary acts of bravery.

The awardees were selected by a high powered committee comprising representatives of various Ministries and NGOs. 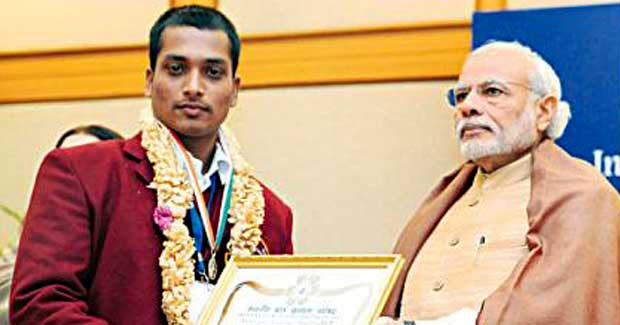 It may be mentioned that Abinash Mishra of Dhirapur village under Nimapara police station limits in Puri district was selected for this award for rescuing a boy Bidhubhusan from Kushabhadra river.

The National Bravery Award Scheme was initiated by the Indian Council for Child Welfare (ICCW) to give due recognition to the children who distinguish themselves by performing outstanding deeds of bravery and meritorious service. The bravehearts received medal, certificate and cash.