Tourists can also book online tickets for picnic sheds, rest houses and cottages in the state botanical garden by logging into www.nandankanan.org.

Now, apart from selling tickets over the counter, the entry fees and tickets for camera meant for the zoo can be purchased online through debit, credit cards and Internet banking.

“An additional amount of Rs 2 will be levied on each entry ticket purchased through debit or credit cards. The online tickets for other reservations, except those for zoo entry, can be purchased a month in advance. The tickets booked online cannot be canceled,” said zoo director Sisir Kumar Acharya.

Zoo officials said the initiative would help them save Rs 10 lakh annually. “While the maintenance of online booking system will cost around Rs 3.5 lakh, the printing of tickets used to cost Rs 14 lakh annually,” said an official. The zoo has also roped in with a bank to provide the visitors with the facilities of swapping machines at the counters.

Director Sisir Kumar Acharya informed that CCTV surveillance system through wi-fi mode has also been introduced in the zoo. As many as 43 cameras mounted on 18 poles will cover the entire visitors’ paths to monitor any unlawful and disruptive activities in the animal park. The project, estimated at Rs 91.3 lakh, has been executed by Electronic Corporation of India Limited.

On the occasion, Nandan, the wild tiger which had walked into the park triggering a wave of controversy, was also released to a public exhibit area. Two normal colored male cubs, offsprings of Nandan and Megha, were also taken into an enclosure with their mother. A life-sized sculpture of ‘Kanan’, the tigress which had made Nandankanan its home in 1967, was also unveiled. 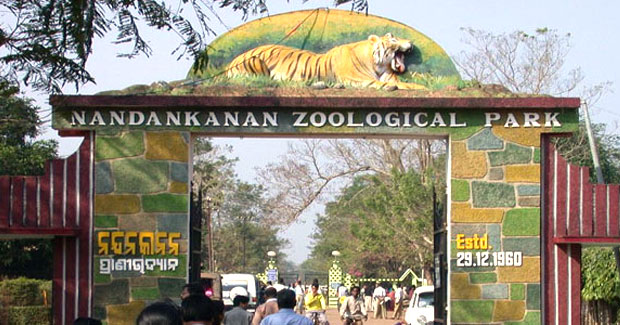