Gangadhar Rout of Kanpur village in Odisha’s Keonjhar district has invested all his savings to build a bridge over Salandi river to connect at least six villages with the mainland.

It’ll benefit more than 10,000 people who used to remain cut off during monsoon season. He spent all his retirement benefits of around Rs 12 lakh to complete the “under construction” bridge for the past 14 years.

Construction of the bridge taken up by the Hatadihi block administration a decade back was halted halfway due to funds constraints.

“The bridge was a necessity for six villages as the residents have been facing untold miseries during the rainy season. I decided to spend my entire retirement benefits to complete the bridge. It became easier as my family members backed my decision,” he said.

Nearly a year after 76-year-old Daitari Nayak of his district made it to the headlines for carving out a 3-km-long canal through the hills, the sexagenarian has earned the title of ‘bridge man’ for his noble work. 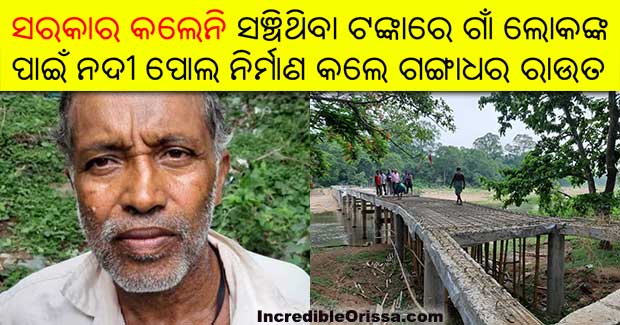