A tribal youth from Odisha’s Sambalpur district has been selected to join as a research associate in Germany. He once took cows out for grazing, worked as a domestic help and went to the forest to collect fire wood and forest products.

Sesadeb Kishan, 24, lives in a remote village named Balasanghare in the backward Naktidol block of Sambalpur district. The tiny village has no literate people and no scope for proper education. Sesadeb lost his mother when he was only one year old. Villagers persuaded his father, Bipin Kishan, to marry a second time, but he chose not to and took care of his son.

With an attraction of midday meal served in school, Sesadeb joined Sevasram school in the village. It was tough for him to adjust in classrooms because he didn’t have the opportunity to join an anganwadi centre to get primary school education.

After school hours, the little boy helped his father in the field and with cooking at home. Sesadeb secured the highest marks in Class V. The Kisinda Anchalik Mahila Mahasangha honoured him in 2005 for coming first in class. In 2006, he was selected to study at Navodaya Vidyalaya, Sambalpur, and continued there till 2012. In 2006, his father fell ill and lost his capacity to work in the field.

With his father unable to earn, there was none to provide pocket money to Sesadeb. Consequently, during his vacation, Sesadeb returned to his village and worked as a labourer for money to pay for food for himself and his father.

Knowing his interest in education, a teacher provided the money to fill up the form for an entrance examination. He secured the 16th rank, but failed to appear in the interview due to his father’s illness. He admitted his father to the hospital and took care of him because there was no one else. His father died that year.

Sesadeb then became a private tutor to earn some money to clear the loans incurred by his father for his treatment.

The youth did not lose hope and took the entrance examination next year and secured a seat in Niser. He became a day scholar and at the same time, started contributing articles in American journals. He also began appearing in several interviews for research work in some of the European countries. He finally got selected as a research associate in the George August University of Gatingen, Germany. He will join the institute in September. 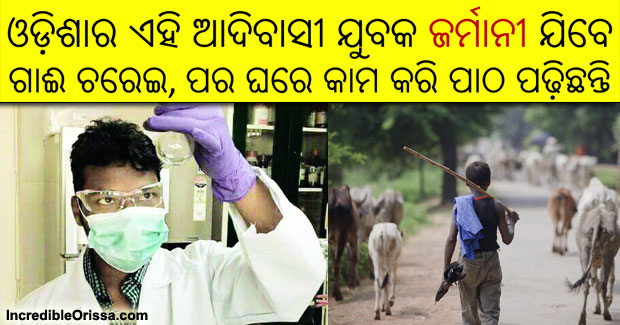