Devotees thronged the Jagannath temple in Puri to offer prayers to the Trinity after the administration threw open the Jagamohan (prayer hall) on Monday following a direction from Orissa High Court.

The Shree Jagannath Temple Administration opened the Jagamohan to devotees after almost two years after the Archaeological Survey Of India took up repair, including the sanctum sanctorum.

The much-awaited opening of the renovated Jagamohan was delayed for nearly five hours on Monday owing to disruptions in the execution of the daily rituals. This further led to an inordinate delay in the preparation of the Mahaprasad as well. Till the time of the filing of the report, the Mahaprasad was not ready for sale to devotees.

In compliance with the April 10 Orissa high court order, the Jagannath temple administration on Sunday announced to open the Jagamohan on Monday after the completion of the Sakala Dhupa ritual, which usually gets over by 12pm every day. But the Sakala Dhupa, which followed a host of other rituals, was completed at 4.40pm after which the temple body opened the Jagamohan at 5.10 pm, much to the chagrin of devotees.

According to the court order, one servitor had to enter the sanctum sanctorum to perform rituals. However, as he could not make it because of ill health, the other servitors did not turn up to perform the job in his place. “The entire process was delayed. Later, the collector and the temple’s deputy chief administrator rushed to the temple to sort out the issue,” a temple official said.

Opposition Congress and BJP members on Tuesday created din in the Odisha Assembly over disturbances in the conduct of rituals in the Shree Jagannath Temple on Monday. The Speaker adjourned the House till 11.30 am.

WATCH: Odisha has only existing pigeon carrier service in the world 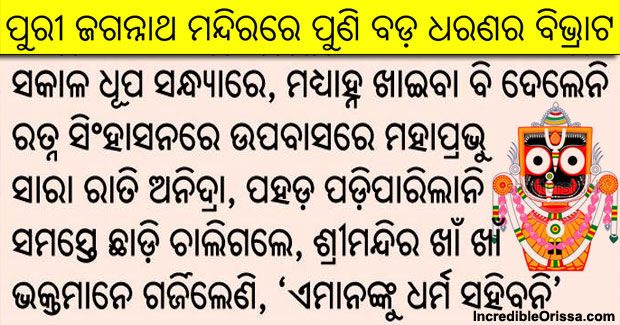