A group of goons misbehaved ‘Sahanai’ serial actors in Bhubaneswar while they were returning from their shooting set in a production house car at around 11.35 pm on Monday.

A gang of ruffians allegedly stalked actress Abhipsa Bhanja (22), forcibly opened a door of the car she was travelling in along with her colleague Chinmay Kumar Mishra (27) and misbehaved with them at Mausima Square.

“We were returning from a shooting when three persons on a scooty started following our vehicle from Sishu Bhavan Square. A few minutes later, when we reached Mausi Maa Temple Square, another three joined the group. They forced us to stop our car and then opened the doors and misbehaved with us,” alleged Chinmay.

Check also: Woman gang-raped by husband and friends in Bhubaneswar

The duo also accused police of not responding to their calls when they dialled the police emergency number, 100, after being stalked by the goons for around 15 minutes.

“I was sitting in the rear seat, while Chinmay was in the front. The driver sped up our vehicle, but they kept on stalking us. We made a call on 100 around 11.52pm and described our ordeal, but we did not find any police van coming to our rescue,” said Abhipsa.

The actor duo lodged a complaint at Lingaraj police station on Tuesday. Police said they would examine footages of the CCTV installed at Sishu Bhawan. 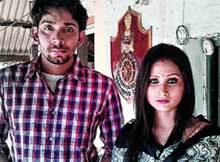 “We have received the complaint and are looking into the matter,” said inspector in charge of Lingaraj police station Janardan Padhi.

“Is this the safe Bhubneswar we are talking about? Everybody, especially girls, should try and finish work before 10pm and get back home. The streets in the capital city are no more safe at night,” said the actors.