Bollywood superstar Salman Khan thanked the Odisha government for organising the Hockey Men’s World Cup 2018, while participating in the second phase of the inaugural function at Barabati Stadium in Cuttack.

Thousands of his fans went berserk when the ‘Bhaijaan of Bollywood’ started his speech by saying a few Odia words such “Jai Jagannath” and “Mu Tumaku Bhala Paye”, among others. Watch full video here.

“I am grateful to Chief Minister Naveen Patnaik for giving me an opportunity to come here and greet everyone on this occasion. I am touched by the warmth and welcome of the people of this State,” said the Dabang of Bollywood.

The Odisha CM also acknowledged Salman Khan’s presence and thanked him for being a part of the event. “The people of Cuttack truly enjoyed your wonderful show today. Thank you for being here,” the CM said.

This apart, Chief Minister also felicitated both Salman Khan and AR Rahman. While this was Salman Khan’s maiden visit to Odisha, it was Music maestro AR Rahman’s second consecutive performance. 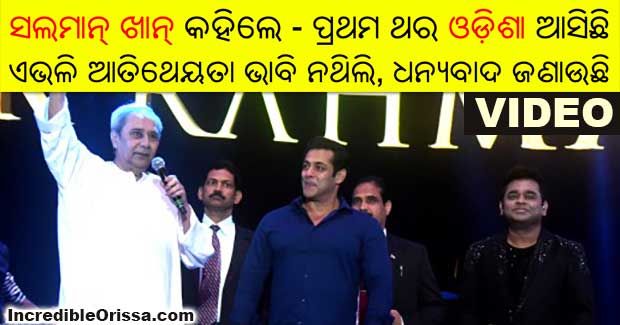