Bhubaneswar based IT consultant and filmmaker Dilshad Ayubi has come out with his second short-film ‘French Cut’ – which has gone viral on YouTube.

It is an 18-minute film that takes a long, hard look at youngsters who take their relationship for granted.

“The title ‘French Cut’, a popular facial beard style, is the crux of the story and the whole narration revolves around it,” Ayubi claimed, adding that a lot of thought has gone into it.

Shot at various locations of Cuttack and Bhubaneswar, the film stars Siddhanta Sharma and Sonika Tiwari. The actors were selected after auditioning several youngsters from various quarters.

“We conducted auditions at an engineering college, a B-School and an IT-company. Six finalists shorlisted from these places were auditioned again for the lead roles,” said Ayubi, who hails from Gaya in Bihar.

There are two songs in the film composed by his friend Tiyash Basu. The songs released on YouTube on the New Year eve have already started becoming popular.

The filmmaker said students and young professionals had especially liked the film. “We have screened the film in a number of colleges, corporate offices and other popular hangout zones because the primary target of the films are the youths. People really liked it.” 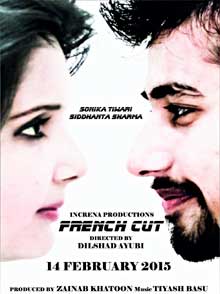 His first film ‘Sanjeeda’ was aimed at creating awareness among train passengers about drugging in trains and on platforms and was screened at a number of prominent railway stations across the country.

“I am presently working on my third film ‘Dui ek dui’, which is like an art film unlike my other films. The story is based on the life of a tea seller, who goes a step ahead to take on others’ responsibilities and how this puts him in trouble,” said Dilshad Ayubi.