Sudarsan had earlier won the People’s Choice prize in the solo category for his creation “Save tree, Save Future”.

Odisha Chief Minister Naveen Patnaik Monday congratulated sand artist Sudarsan Pattnaik for winning prizes at the World Cup. “In the field of sand art, Sudarsan is a renowned name,” the chief minister said in a statement.

In a separate statement, Union Minister for Tribal Affairs Jual Oram said Sudarsan was the first Indian to win prizes at the World Cup of Sand Sculpting. “It is with great joy and pride I extend my congratulations to him. We are proud of his achievement,” he said. 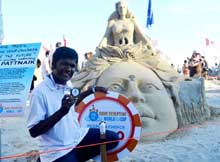 This year Sudarsan was awarded Padmashri by the Govt. of India for his contribution to sand art.

He has participated in more than 50 International championships and festivals around the World any won many prizes for the country.