Ollywood actor and one of the star campaigners of the Biju Janata Dal (BJD), Anubhav Mohanty, has been announced as one of the party’s candidates for Rajya Sabha to fill up the vacancies caused by sitting RS members contesting 2014 polls.

Anubhav has been promised a Rajya Sabha seat to keep him free and motivated to campaign for party candidates in the election.

Anubhav, who hails from Cuttack, is a Superstar in Ollywood. He has been very active in all meetings and campaigning after joining the BJD bandwagon. The party wants to take maximum advantage of his popularity across the state. Thus, he was not asked to contest the polls.

There will be four vacancies in the Rajya Sabha from the State as four BJD MPs from the Upper House have been announced as party candidates for Lok Sabha and Assembly seats.

While former India hockey captain Dilip Tirkey, a Rajya Sabha member, has been fielded from the Sundargarh Lok Sabha constituency, former minister AU Singhdeo has been announced as the BJD’s candidate for Balangir Assembly seat. Rabi Narayan Mohapatra, a Rajya Sabha member, has been fielded as a candidate from Ranpur Assembly seat while another member Sashi Bhusan Behera has been recalled to replace former minister Aurobindo Dhali as the BJD nominee for Jaydev Assembly seat. 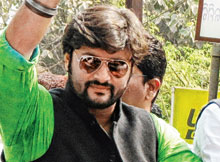 Anubhav will replace Singhdeo in the Rajya Sabha. Singhdeo was asked to resign and contest from Balangir Assembly seat.

The other three RS members fielded by the party are yet to be asked to resign. A decision on their resignation from the Upper House will be taken after the elections are over.