You are not Odia enough if you don’t start hunting for Pakhala – no matter which part of the country you reside in during summers! From star hotels to roadside dhabas, and restaurants in Bhubaneswar, each tries to serve the delicacy in the most authentic manner.

In fact, this raging popularity of Pakhala has led to its official celebration as ‘Pakhala Dibasa,’ which is held on March 20 every year. On this Pakhala Divas, JustVish youtube channel introduces you to three must-visit places in Bhubaneswar where you can relish the incredible taste of Pakhala.

They scampered around the city of Bhubaneswar to bring you the best Pakhala joints in the city for all pockets. According to them, best Pakhala in Bhubaneswar available at Ballaree Hotel (CRP Square), Odisha Hotel (Sahid Nagar) and Kanika Restaurant (Mayfair Lagoon).

The restaurants serve innovative side dishes which include ‘Posto Bada’, ‘Chhatu Poda’, ‘Chhuin Besara Bhaja’, ‘Baigan Tomato Chhecha’, ‘Kancha Aamba Chhecha’, besides chutneys like ‘badaam chutney’ and ‘Dhania Tentuli Chutney’. The menu keeps changing everyday for seven days and there are at least 12 to 14 variants in both vegetarian and non-vegetarian dishes. 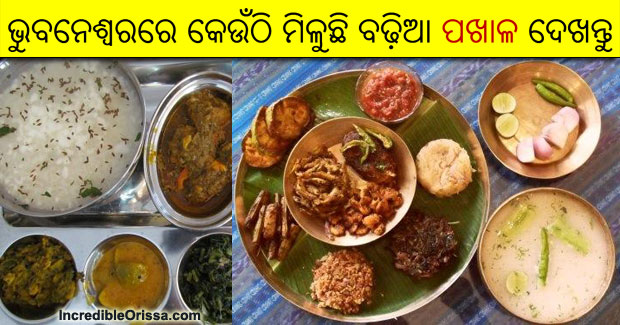