The Bishnois of Rajasthan and Punjab are celebrated for their protection of blackbucks. Across India, other communities too sustain antelopes at their own cost. Residents of about 70 villages in Ganjam district, southern Odisha, live with more than 3,000 of them.

The reason for entire communities turning into blackbuck benefactors may have something to do with how the animals arrived here more than a century ago. A herd of these ungulates wandered into Bhetanai during a drought, and rains followed in their steps. Villagers nurtured the animals as good weather mascots at a time when hunting was the norm. In 1918, Madeshi Chandramani Dora, a resident of Bhetanai, placed an ad in a newspaper called Prajamitra, report Bikash Rath and Y. Giri Rao of Vasundhara, an Odisha NGO. Dora announced that the area was off-limits for hunting as the villagers valued the animals “dearer than sons”.

In 2010, the Zoological Survey of India (ZSI) published a monograph on these blackbucks. About 60% of the landscape is under cultivation, and residents feel the wild animals live on their land year-round.

But the ZSI reports these animals subsist on village pastures called gowchar that they share with livestock. In summer, wild grasses shrivel up, and there’s nothing else for the wild ungulates to eat. This is the season when herds of does nibble on the new shoots of cereals and pulses, while the bucks descend on the fields in winter.

In such a situation, any farmer would fence his fields to keep the herbivores out. But not these peasants who think their crops belong to the blackbucks too. Lack of irrigation and the added burden of the animals eating their crops, albeit seasonally, was too much for some farmers. Even then, they didn’t feel compelled to barricade their fields. Instead, they gave up farming altogether.

For instance, about 25% of the fields in Bhetanai, about 50 kilometres from Berhampur, lie barren. The farmers could afford to because it wasn’t their primary source of income or family members working in distant cities sent money home. It’s hard to gauge how severe crop damage is. Nearly 90% of the interviewees say they lost crops to blackbucks, but most feel it isn’t worth complaining. Many like the animals so much they don’t mind the loss. More than 70% say they don’t want compensation, but they want the government to build an irrigation project. (Source – The Hindu)

ALSO READ: Teachers to be recruited through competitive examination in Odisha 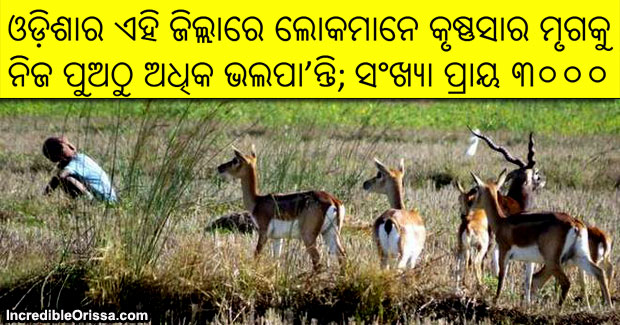