Two students from Odisha, Sharanya Nanda, and Chinmay Choudhury, will watch Chandrayaan-2 landing on the Moon surface live with Prime Minister Narendra Modi at the ISRO in Bengaluru on September 7.

Chandrayaan-2 landing on the surface of the moon is getting close day by day, and 60 students are selected from all across India who will all witness the historic landing with Prime Minister Narendra Modi.

ISRO had conducted a ‘Space Quiz’ for students from the eighth to the tenth standard. The child with the most number of correct answers in 10 minutes emerged the winner.

Notably, the Chandrayaan-2 was launched on July 22 from the Sriharikota space station in Andhra Pradesh. The mission is made up of an orbiter that will orbit the Moon for one year. The lander will make a landing on the southern region of the Moon on September 7. A rover, ‘Pragyan’, which is inside the lander, will roll out if the landing is successful. 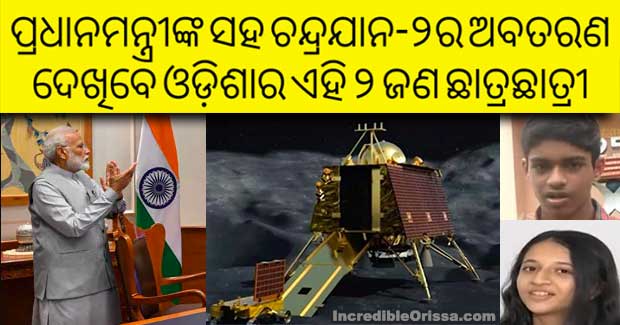