A huge crowd had gathered yesterday to catch a glimpse of Indian cricketers arriving at the Biju Patnaik airport for the November 2 one-day tie with Sri Lanka.

The excitement continued all day as the Indian players started arriving at the Biju Patnaik airport in batches of two and three and were then escorted amid tight security to the Mayfair Hotel where they would be lodged.

By evening, 13 Indian players, including Ajinkya Rahane, Suresh Raina, Ishant Sharma and R Ashwin, reached the city. Stand-in captain for the first three matches of the series Virat Kohli arrived late as his flight was delayed. 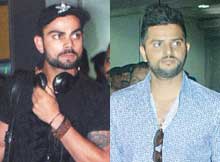 Officials of the OCA said that Sri Lankan players would reach Bhubaneswar today.

Commissionerate police have made elaborate security arrangement for the match.

Meanwhile, thousands of fans, many of them girls, waited hours in queue for their turn to get tickets for the match on Sunday.