Senior BJD leader and Rajya Sabha MP from Odisha, Kalpataru Das passed away today at the Institute of Rotary Cancer Hospital at the All India Institute of Medical Sciences (AIIMS). He was 65.

He was admitted at Delhi AIIMS since Monday. Das was on life support system after deterioration in health condition.

Kalpataru Das is survived by his wife and three sons, all of whom were present at the bedside when the end came.

Born at Bhotka village in Jajpur district on August 15, 1950, Das had risen through the ranks to become a four-time MLA, a cabinet minister and finally a Rajya Sabha MP.

He was elected to the Assembly from the Dharmashala constituency four times in succession since 1990 – the first time on a Janata Dal ticket and the next three times on BJD ticket. In the 2014 Assembly elections, however. his son Pranab Balabantaray was nominated from his seat while Kalpataru was nominated for the Rajya Sabha. 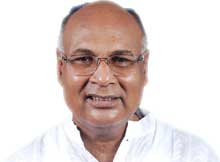 Family sources said his body would be flown to Odisha tomorrow morning and taken to Dharamashala for cremation after party colleagues and others pay their last respects in New Delhi.