Do you know that Dr. Kota Harinarayana, who contributed in designing the India’s first home-grown fighter jet ‘Tejas’ actually hails from Berhampur, Odisha?

Kota Harinarayana has worked with organisations like HAL and DRDO and has been the driving force behind developing India’s light combat aircraft Tejas. It was his discipline, aptitude for systems design and ability to bring together and manage so many different organizations that helped spur the Tejas programme.

He has served as Chief Designer at HAL Nashik division, as Director ADE, Bengaluru, and as the LCA Programme Director at ADA in a career spanning several decades until he retired in 2002. He was also awarded the Padma Shri by the Government of India in the same year.

Kota Harinarayana said around 20 educational institutions like IITs of Kanpur, Kharagapur and Bombay, 40 Research and Development (R&D) labrotaries and over 500 engineers toiled hard for years to develop the indigenous aircraft in the country. While a few components of this jet were imported, most parts of it are made in India.

Though he is settled in Bengaluru now, Harinarayan visits his home town frequently.

Tejas, India’s first home-grown fighter jet, was finally inducted into the IAF on Friday after a tortuous saga spread over 33 long years with the launch of the first squadron of two Light Combat Aircraft (LCA) Tejas in Bengaluru.

Here we talk to this legend to get a first-hand account of the man who has seen the Tejas take flight from the drawing board into the skies. 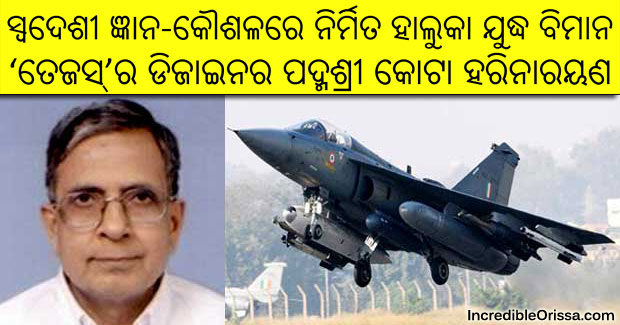