Editor Manoranjan Mishra asked him about plot of the film and how much it is similar with Sarathi Baba’s story.

Kuna Tripathy said the getup may be inspired from Sarathi Baba’s look, but the story is not based on any perticular Baba’s life.

WATCH VIDEO: Latest interview of Sonali Monalisa & what she said about Sarathi Baba 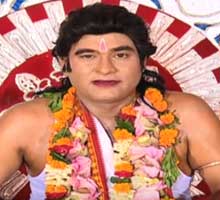 They are trying to make a good film and will create awareness among general people about all these Bhanda Babas, he said.