Lingaraj Abadha will not be available for three weeks now. Sixteen rooms of the roshaghara (kitchen) of Ananta Basudeba Temple in Bhubaneswar were gutted in a fire on early Friday morning.

The temple kitchen is one among the most sought after destinations for Abadha (cooked food) with more than 5,000 people thronging the Lingaraj temple on a daily basis.

In 2008, a similar fire outbreak had caused extensive damage to the temple. Servitors also said a number of minor fire incidents had also taken place in the temple. The servitors demanded a permanent structure in the temple for cooking of the mahaprasad.

Thousands of devotees throng the Ananta Basudeba Temple situated near the Bindusagar tank off the Lingaraj temple. Following the mishap, devotees will be deprived of the Abadha (Mahaprasad) for the time being, while kotha bhoga will only be prepared for the deity. Around 300 people are involved in various activities, including cooking in the kitchen. The temple attracts people from Bhubaneswar as well as outside for its food.

Devotees, however, were forced to return from the temple kitchen after the mishap. “The temple kitchen was famous for its Abadha and people from even the neighbouring districts throng it. We went to the temple to have lunch but were told that the kitchen had been gutted. The authorities should reopen the kitchen for devotees at the earliest possible,” said a devotee. 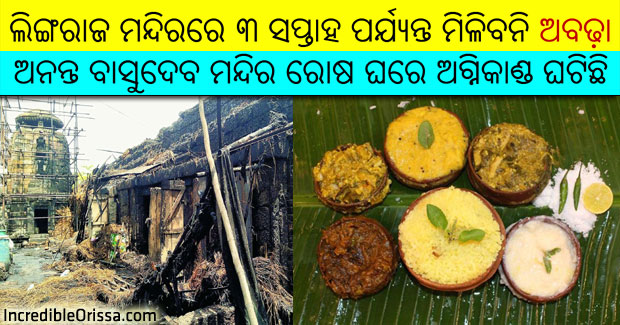