Odisha Chief Minister Naveen Patnaik today launched ‘Mo Saathi’, a mobile phone application that seeks to address the safety concerns of women in distress in the Twin City of Bhubaneswar and Cuttack.

“I am happy to dedicate this application to women of the twin cities and urge all the women to make use of this technology to enhance their own security,” he said after launching the app at the headquarters of the Commissionerate Police. He directed the police to give prompt response to women making use of the app.

While the state government has already taken several steps to ensure safety of women by setting up ‘Mahila and Sishu Desk’ in all police stations in the state, the commisionrate of police of Bhubaneswar and Cuttack have also launched Pink Auto Service exclusively for women.

Noting that crimes against women have been a major concern of the government, Mr Patnaik said the commissionrate of police had already imparted self-defense training for college girls.

It has been serving as an emergency contact, messaging and information application. This application provides single click Keys to call or send SMS to your contacts in case of an emergency. The message delivered to the recipient will have your GPS location and this happens with ONE single click. You can reach out to people who can help you during an emergency situation.

Users can create various groups by including contact numbers of their family members, friends and authorities such as local police station, hospitals and toll free emergency helpline numbers. User can then assign such groups to special Keys – SOS, CALL. SOS and Call are available on Home screen for quick access. These actions can be invoked during an emergency situation with a single click or touch.

After downloading the app from Google Play Store, a new user has to register with the Commissionerate Police website, after downloading a form, by sharing their name, mobile number, Email ID, present address and that of a minimum of three relatives.

Once the user registers, she/he will get an SMS on her mobile number given at the time of registration with a download link and registration key. The user has to enter this key in the registration window in the application. This is a one-time process, Twin city Commissioner of Police Dr RP Sharma said.

“In case of an emergency, the user can send an alert by pressing the power button/soft button five times. As soon as the button is pressed, the camera of the phone will automatically start and capture a 30-second audio and video recording on the phone which will be transmitted to the Police Control Room. At the same time, the GPS of the phone will be automatically activated giving the exact location of the victim and the concerned officers on duty will send PCR to the spot to save the woman in distress,” explained Dr Sharma.

An SMS alert will also be sent to three relatives of the user in distress. 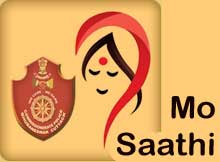 “All the details of the victim, including her location, time will be there in the SMS which will also be transmitted simultaneously by the Police Control Room to the PCR vans in the area and the local police station for immediate action. Generating false SOS alerts/ alarms, intentionally or unintentionally, will lead to cancellation of the registration after three false SOS alerts,” he said.