Odisha boy, who was orphaned by the super cyclone in 1999, now works for the welfare of orphan and runaway children in the state.

For 25-year-old Utkal Maity, who was orphaned on October 29-30 by 1999 super cyclone, life has had many twists and turns. Utkal of Japa village in Jagatsinghpur’s Erasama block, the worst affected area in the natural disaster, lost his parents and siblings to nature’s fury.

Utkal, now 25, was adopted by the SOS children’s village in Bhubaneswar in December 1999.

“After going through the trauma of losing my near and dear ones, I decided to work for children for which I did my post graduation in social work from a private institution in Bhubaneswar. My dream was fulfilled last year when I got a job as counsellor in the Society for Children in Bhubaneswar,” he said.

Utkal said that the organisation has already rescued around 1,200 children in a year from the streets, markets, railway stations, bus stands and other places in the state. “I am now carrying out a survey on the trafficked and runaway children in Rourkela,” he said.

Recollecting the day when he was rendered an orphan, Utkal said, “It was around eight in the morning on October 29, 1999. I suddenly saw huge wall of water at least 22 ft high racing towards our seaside village. Within seconds the giant wave devoured the whole village. My father Uttam, mother Sabitri and four-year- old sister Ambika perished in the gale”.

“I had grabbed my sister’s hand but the wave was too powerful. Slowly she began to slip away and the sea dragged her away from me. Their bodies were never found. I survived because I managed to climb a coconut tree,” he added. 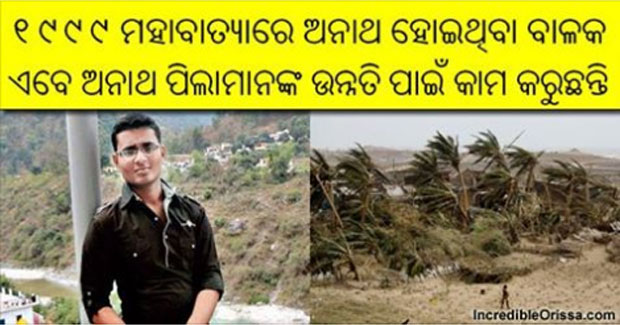