Displaying uncommon bravery, an 11-year-old braveheart Biswajit Puhan of Icchapur village under Balikuda tehsil in Jagatsinghpur, rescued a 5-year-old girl from drowning in Machgaon main canal a few days back.

Biswajit had saved Mamuni Biswal of Dihakarada village in Talada panchayat of Puri district from drowning in the canal on August 13. Mamuni had come to her relative’s place at Icchapur. On the fateful day, she was playing on the embankment of Machgaon canal with her friends. Suddenly, she slipped and fell into the canal. Finding Mamuni in trouble, her friend shouted for help.

Meanwhile, Biswajit heard their screams and rushed to the spot. He jumped into the canal and dragged Mamuni to safety. After rescuing the girl, a quick-thinking Biswajit performed chest compressions on her and drained out the water from her belly. Mamuni was then rushed to Balikuda hospital and discharged after after primary treatment.

After being informed by the Chief Minister’s Office, Collector Yamini Sarangi directed Balikuda Tehsildar Paresh Kumar Nayak to conduct an inquiry into the incident.

As directed by the Collector, Nayak visited Icchapur and interacted with Biswajit and his family members besides local villagers.He also recorded the child’s statement. “A detailed report about Biswajit’s courageous act would be submitted to the Collector soon,” the Tehsildar said and added that the child’s name will be recommended by the district administration for bravery award. 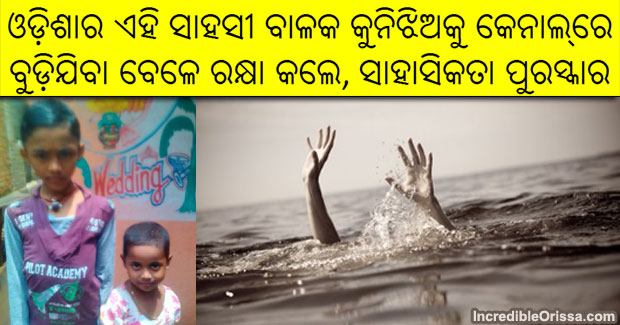