Rudra Ranjan Sejapada from Odisha has won an international short film competition in New Delhi that had 1924 entries from 111 countries.

Sejapada received the award from the chief executive officer of Gray Matters India, Ragini Chaudhury, in New Delhi. “My film ‘Ek Idiot’ won the best screening award as the 5th Best Film in EduDoc 2017, which carried a trophy and citation,” said Sejapada.

“In the story, the teacher rebukes Class V student Bablu for his bad handwriting. Disgusted with the attitude of the teacher, he vents his anger by writing ‘I am a donkey’ with a chalk on the road. The teacher happens to come that way and Bablu flees. The teacher recognises Bablu’s handwriting and realises his mistake,” said Sejapada.

A native of Andhari village in Saraskona block of Mayurbhanj district, Sejapada’s 5-minute film was on education. The theme of the film was the physiological effect on a child who is bullied by his teachers for random things.

Sejapada said he alone took care of every aspect of the film right from shooting to editing and it had cost him Rs 2,000 when he made it in 2012. 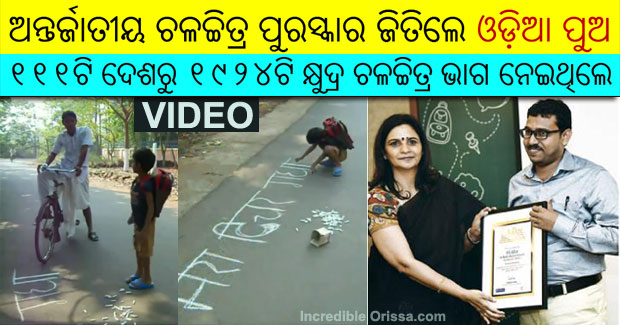