Using the metal waste material left by the Titli and Fani cyclones, students of Odisha’s Berhampur ITI have built a giant 70-ft-tall guitar.

Now the scarp guitar registered a place in the Asia Book of Records. Chief Minister Naveen Patnaik also hailed the students engaged in the project.

The guitar has been built with metal sheets from the roof of a damaged structure on the ITI campus. All metal sheets and beams damaged by cyclones had to be replaced. Instead of selling off the damaged sheets as scrap, the students decided to reuse it as an artefact.

Around 150 students, including girls, from the fitter, welding, plumbing, electrical and painting trades, worked after 4 pm for around four months to build the guitar.

The giant guitar is now a part of an open-air museum of ‘art from waste’ being developed on the Berhampur Industrial Training Institute (ITI) campus. 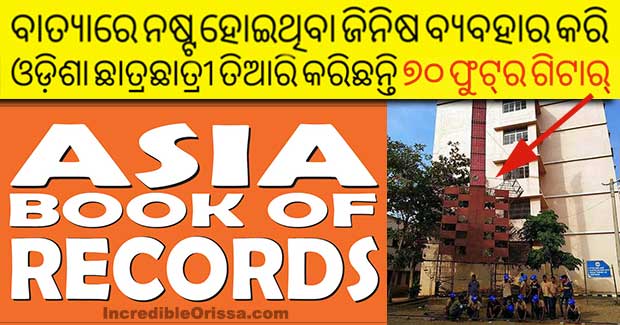