BJD president and Odisha chief minister Naveen Patnaik expressed his gratitude to the people of Kandhamal for the great victory of his party’s candidate Pratyusha Rajeswari Singh, who defeated her nearest rival Rudramadhab Ray of the BJP by over 2,98,000 votes in the Lok Sabha by-poll. 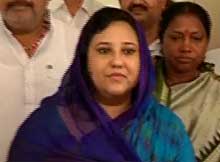 After the win, Rajeswari said she would work for the overall development of the region and fulfil the dream of her late husband.

“It is the victory of Chief Minister Naveen Patnaik,” she told reporters.