Six pythons were recently found inside pipes in the Dhenkanal district of Odisha and the video of the reptiles being captured will give you the chills.

The video is from the Dhenkanal district of Odisha and shows rescuers capturing the pythons. The video shows forest department officials working to capture the huge pythons as a massive crowd watches them.

According to Indian Forest Services officer Susanta Nanda, the snakes were found inside reinforced cement concrete or Hume pipes in the Dhenkanal district of Odisha. Prameya News reports that one snake was first spotted in an abandoned pipe by some goat herders of the Saptasajya village, who informed locals of its presence.

Forest officials reached the spot to rescue the python after villagers contacted them. After capturing the 18-foot snake, they found more pythons inside the pipes. Eventually, a JCB machine was used to break the pipes and rescue the snakes safely.

The longest among the pythons measured 18-foot, while another was found to be 16-foot-long. Four others measured between 10 and 12 feet. The six pythons were safely released into the Kumurtanger forest. 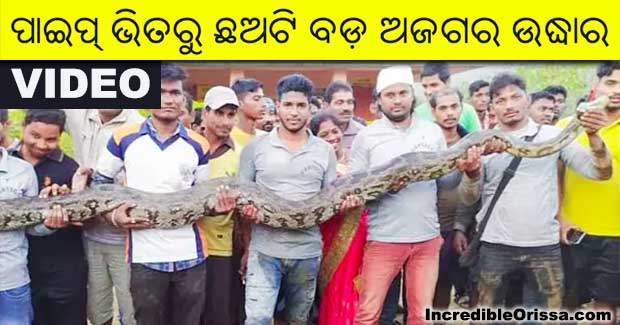