Raghunath Mohapatra is an internationally renowned authority on stone carving. Practicing since 1959, he has trained over 2000 students. He has contributed to the preservation of traditional sculpture and ancient monuments, and has worked on the beautification of the Sri Jagannath Temple, Puri. His famous works include a 6 feet high statue of the Sun God carved in grey sandstone, in the Central Hall of Parliament; and the Wooden Buddha, Buddha Temple, Paris.

Sonal Mansingh is among India’s foremost exponents of Indian Classical Dance. She has been performing Bharatnatyam and Odissi for over six decades. Mansingh was married to former Indian diplomat Lalit Mansingh. The couple decided to divorce later. Her father-in-law Mayadhar Mansingh introduced her to Kelucharan Mohapatra where she had her training in Odissi.

Article 80(1)(a) of the Constitution provides that the president can nominate to the Rajya Sabha 12 persons having special knowledge, or practical experience in respect of literature, science, art and social service. There were eight nominated members in the Rajya Sabha and four vacancies, which were left, were today filled. 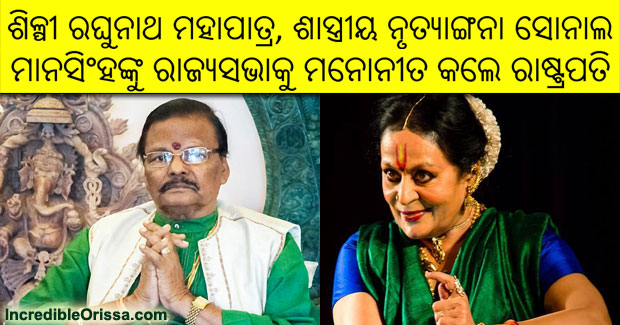