Sudarsan Pattnaik’s 45ft high sand Santa Claus has got a place in the Limca Book of Records as the world’s largest sand sculpture.

More than 1000 tonne of sand with some coloured sand was used in making the sand sculpture. 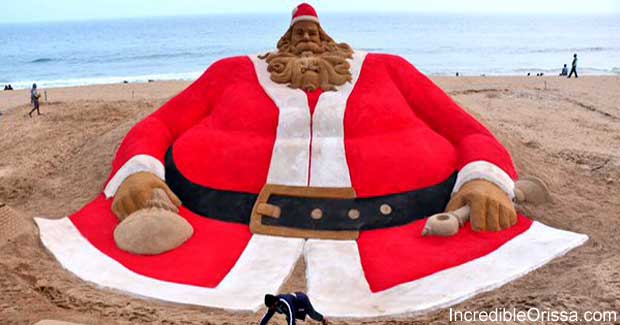 Sudarsan Pattnaik, who was assisted by 20 of his students at the Sudarsan Sand Art Institute of Puri, took 22 hours in two days to build the mammoth structure which is on display at the beach from December 24 till January 1.

He had also created sculptures of Jesus and Mother Mary near Santa Claus.

The reason of Sudarsan’s art trending ahead is because of its popularity worldwide, the artist said. “The art was liked over 10 lakh people and shared by not less than 5 lakh people. Facebook users in different countries have given their comments and shared links of local, national and international media reports on the artwork,” Sudarsan said.

While for the first time Sudarsan’s art topped the Facebook trending, he had on several occasions made records by creating sand arts on Santa Claus theme. In 2008, he made 25-ft high Santa on the Puri beach, which stormed into Limca Book of Records. He also carved 100 and 500 miniature sand Santas on the beach in 2009 and 2010, respectively.