Swapna Priyadarshini, the 17-year-old beauty from Odisha’s Dhenkanal was recently crowned Miss Photogenic at Miss Tourism and Culture Universe 2018, held at Yangon in Myanmar. She was the third runners-up, where the crown was won by Russia’s Svetlana Khokhlova.

Swapna revealed that she was the youngest among 37 participants and was nervous about her oratory skills in the beginning. “All the contestants were taken on an extensive tour across Myanmar and we experienced the art, culture, architecture, tribes, cuisine, influence of Buddhism and its philosophy, to name a few. It was an enriching experience,” she said.

“I want to become Miss Universe and also try luck in Bollywood . I idolize Sushimita Sen for her looks and simplicity and to follow her footsteps,” said Swapna.

This belle from Odisha elegantly promoted the culture of Odisha and presented the Dalkhai dance dressed in the famed Sambalpuri saree in one of her presentation rounds. Food was her theme and she chose to present this Sambalpuri folk dance as it is symbolic of the harvest season back home. Her presentation got her major applause and appreciation from the audience.

Swapna Priyadarshini is currently pursuing plus II at Kendriya Vidyalaya in Bilaspur where her father works as a Chief Manager in a Bank. She feels that the beauty pageant in Yangon will help to move towards her aim.

Odisha beauties are slowly leaving a mark in beauty pageant industry with their brain, poise and panache. From Padmalaya Nanda to Sonika Roy, the girls have had made heads turn in national and international competitions. 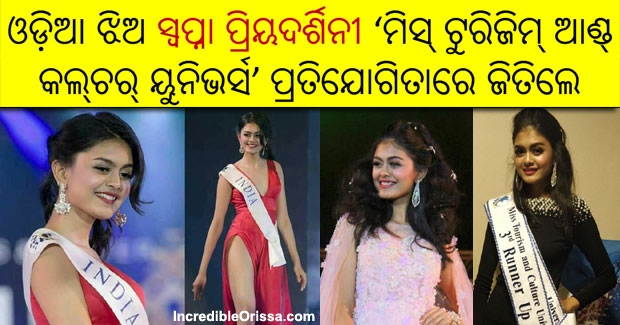