After the Debasnana Purnima, the divine siblings of the Jagannath temple in Puri get a high fever as a result of the lavish bathing during the festival.

Hence, they undergo treatment in a secret hideout. The devotees are deprived of getting a glimpse of their revered Lord Jagannath since the idols are replaced with patti dian or traditional painted images that are worshipped in the Puri temple during the fortnight long hibernation of the deities.

With the Lord unable to give darshan because of illness, the devotees are flocking to the Alarnath temple at Brahmagiri village, around 25km from Puri town, where another form of Lord Jagannath has been enshrined.

At the Alarnath temple, hundreds of devotees have started visiting to see the temple’s presiding deity, believed to be an avatar of Lord Jagannath. As the devotees would not be able to get the Lord’s darshan in the Puri temple for 14 days, they can instead have a glimpse of the patti dian or traditional painted images of the deities placed inside the Alarnath temple.

Carved out of black marble, the idol worshiped at the Alarnath temple has four arms holding conch, club, lotus and chakra. Lord Vishnu’s mount Garuda, usually placed on a tall pillar in front of the deity, is seen kneeling near the feet of Alarnath here. Also, Lord Krishna’s consorts, Rukmini and Satyabhama, are worshipped in the temple.

Devotees believe that saint Chaitanya had visited the shrine during the anavasara (hibernation) period of Lord Jagannath and sought blessings of the deity here. 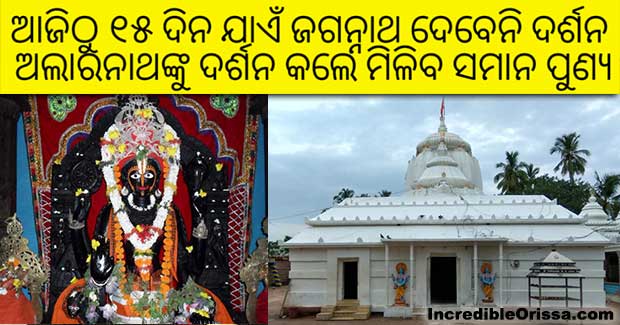 Home > Odia News > Alarnath is another form of Lord Jagannath in Brahmagiri, Odisha