A day after entertaining cricket fans with his explosive innings at Barabati Stadium in Cuttack, Yuvraj Singh meets cancer patients at Mayfair Hotel in Bhubaneswar this morning.

Yuvraj Singh had a stellar return to form on Friday when he smashed 150 runs off 127 balls against England. The Indian team has now left for Kolkata where the third and final match will be held. 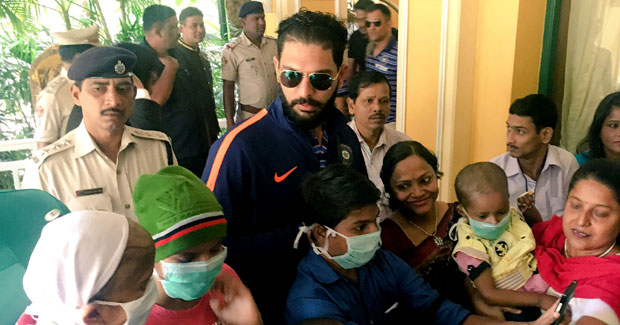 Debashish Mohanty and Shiv Sundar Das, two former international cricketers from Odisha, facilitated the meeting of the children, who are undergoing cancer treatment in a private hospital at Telengapentha in Cuttack, with the star batsman.

Yuvraj Singh had a long drawn battle with cancer after the 2011 World Cup, a tournament that India won largely due to his performances with both bat and ball. He overcame the disease and launched YouWeCan, a foundation aiming to aid cancer patients.

The ODI series against England is Yuvraj’s first appearance for India in nearly two years. His century is also his first since the 2011 World Cup. He and MS Dhoni built a 256 run partnership for the fourth wicket took India to a position of strength. From 25/3, India went on to put up a total of 381. England did get close to the target, largely led by skipper Eoin Morgan’s century but fell 15 runs short of the target.

Yuvraj Singh’s century marks an incredible turnaround for a player whose career looked to be in doubt when he was diagnosed with cancer. Chances of his return to the Indian team also looked bleak after he was dropped from the side due to inconsistent form and fitness issues in two years ago.