After a lavish wedding ceremony in Bhubaneswar, Ollywood hero Arindam’s reception was yet another glitzy evening. The star and his bride Anupa who tied the nuptial knot on December 4 were wished a happy life together by their well-wishers from the Odia film industry and outside.

While the reception party venue was lavishly decorated with beautiful exotic flowers, the bride and groom looked stunning too. The usually style flaunting actor went for a simple black suit while bride Anupa Das was decked up with a designer lehenga in red and contemporary gold jewellery. 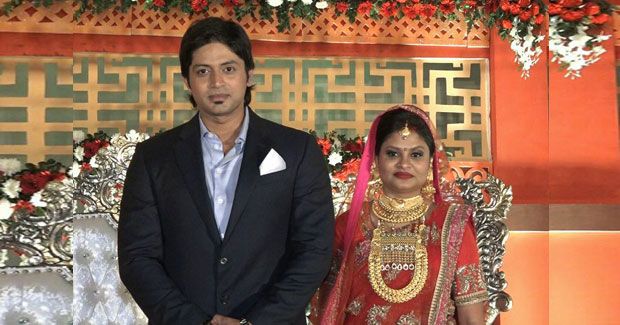 Chief Minister Naveen Patnaik had blessed the couple on their wedding day while many prominent politicians were also seen. At the grand reception party it was the turn of Odia film celebrities who were present in large numbers. The couple’s marriage was conducted at Swosti Premium Hotel in Bhubaneswar.

Cuttack boy Arindam who started his film career in 2006 ‘Prema Rutu Asilare’, is known for his romantic and action performances in Odia film industry. He is immensely popular among Odia film lovers. His wife Anupa is the sister of Odisha Energy Minister Pranab Prakash Das.