Jyoti Prakash Mahapatra who has worked in few Odia TV serials and played an important role in an Odia film made a come back after more than a decade with an inspirational short film titled “Dui Eke Dui”. He has played an impressive character of a tea seller who doesn’t sell tea only but also takes addition responsibility in our society.

Jyoti Prakash Mahapatra is currently working in a famous IT company in Bhubaneswar where he got in touch with his colleague Dilshad Ayubi, who has directed this movie.

WATCH ALSO: How Criminals use Biscuits and Water to drug Train Passengers

This film is made by a team of 6 IT professionals including producer Rupak Das. Other team members are Utsa Chakraborty, Abhishek Kumar and Nitish Bajaj. 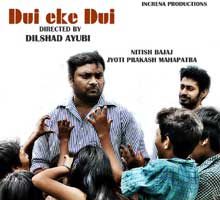 This film is special because of unique initiative associated with it which makes all the children direct beneficiaries who have worked in it. Every single view will help in welfare works for these children. The details of this initiative is available in video description on YouTube. These children are actual kids from a locality in Niladri Vihar, Bhubaneswar not any child artist.

Keep sharing this film and become a contributor.