With the death toll in Pulwama terror attack touching 44 today, it has come to notice that at least two Odia CRPF jawans have also attained the martyrdom during the attack.

The slain jawans have been identified as Prasanna Kumar Sahu of 61 Battalions of the Central Reserve Police Force (CRPF) and a resident of Shikhar village under Naugaon police limits and Manoj Kumar Behera of Ratanpur in Niali of Cuttack district.

At least 44 CRPF personnel were killed and dozens injured on Thursday evening when a suicide bomber rammed his SUV packed with explosives into a CRPF bus on the Srinagar-Jammu highway.

Terrorist group Jaish-e-Mohammed has claimed responsibility for the attack. It also released a video clip of the suicide bomber, identified as Adil Ahmad Dar, which it claimed was shot before the young man carried out the attack.

“Attack on CRPF personnel in Pulwama is despicable. I strongly condemn this dastardly attack. The sacrifices of our brave security personnel shall not go in vain. The entire nation stands shoulder to shoulder with the families of the brave martyrs. May the injured recover quickly,” Prime Minister Narendra Modi tweeted.

Governor Ganeshi Lal and Chief Minister Naveen Patnaik have also condemned the attack and called it a dastardly act of cowardice. 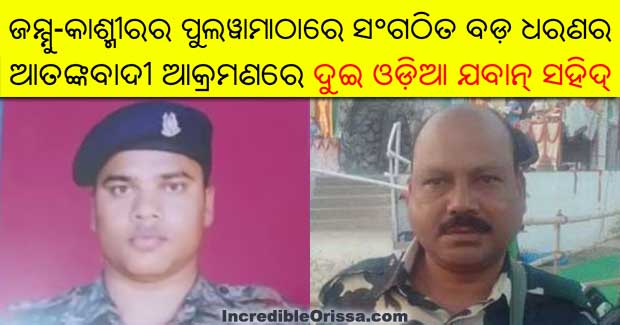