Bibhuti Nayak, born in Odisha’s Jagatsinghpur district, holds 7 Guinness World Records and 12 Limca Book Records in physical strength to his name. He aims to have 72 records to his name.

He currently works as a journalist at The Times of India and teaches underprivileged children martial arts to continue the training of breaking world records.

Bibhuti Nayak sustains himself on a completely vegetarian diet consisting only of pulses and sprouts. In recognition of his physical strength feats, he was given an honorary title of Singh and a pagri (turban) by the Gurudwara where he attempted the record. In addition to that, he is popularly known as the Bruce Lee of Navi Mumbai, for his martial arts and record-breaking accolades.

Bibhuti Bhushan Nayak’s fictional biography has been written by Stephen Kelman, nominee of the 2011 Booker award. The Book is titled Man on Fire.

In the late 80s, a few months after moving to Mumbai, Bibhuti Nayak chanced upon a copy of the Guinness Book of World Records at a pavement shop near Marine Drive, Mumbai. Having come from Odisha with dreams of carving a good life, Nayak spent hours flipping through the book’s pages, in a bid to find inspiration and respite from his dreary accounting job. However, the records captured by his fellow Indians seemed like a joke. “Longest beard. Longest fingernails. Most time sitting on pole. Most snakebites survived. Nothing matched my desire to branch out in a new direction,” writes Stephen Kelman, voicing Nayak’s predicament in his book Man on Fire.

Bibhuti Nayak holds the world record for most concrete slabs broken over the groin with a sledgehammer (three); highest number of one-handed cartwheels in one minute (34); and highest number of sit-ups in one hour (1,448).

In the course of setting the record for the most number of sit-ups in one hour, Bibhuti suffered a brain hemorrhage and spent three days in a coma due to the lack of any padding underneath his head and in the process hit the back of his head against the concrete floor 1,448 times.

Bibhuti Nayak has a unique perspective on life and he is an inspirational force in the lives around him, and this is what I hoped to capture in Man on Fire, says Stephen Kelman. 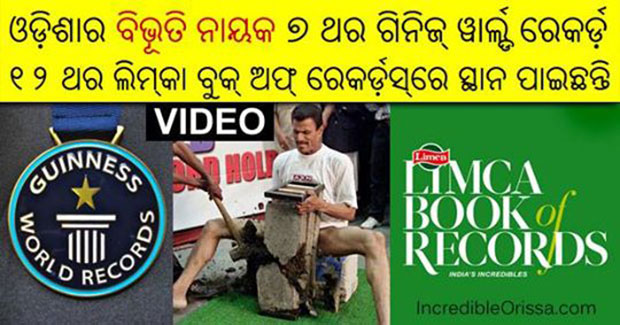