Notably, Pramod became the first Indian to lift double gold in the World Para-Badminton Championship. The World No.1 defeated England’s Daniel Bethell in the men’s singles SL3 category at the championship.

Similarly, in the doubles, Pramod along with his partner Manoj Sarkar came from a game down to defeat compatriots Nitesh Kumar and Tarun Dhillon 14-21, 21-15, 21-16 in the final.

The minister presented two cheques– one of Rs 15 lakh for winning a gold medal in men’s doubles SL 3-4 category and another of Rs 20 lakh for securing top spot in men’s singles SL 3 category– to Bhagat for the achievement.

Pramod Bhagat was recently selected for the prestigious Arjuna Award. Hailing from Attabira in Bargarh district, Pramod has brought laurels to Odisha and nation several times. 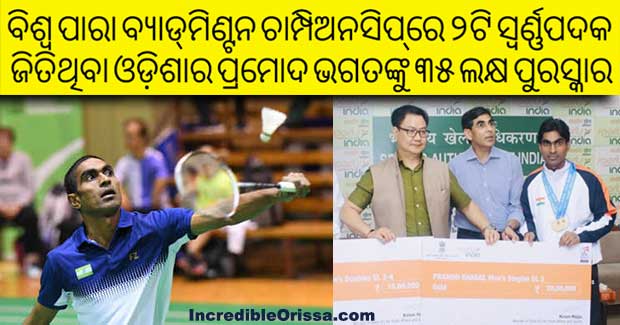