Md Jafar Iqbal and Pankaj Bhue, two players from Odisha were part of the world-cup winning India blind cricket team, which beat Pakistan in a thriller to retain the Blind Cricket World Cup played in Sharjah.

Soon after India lifted the Blind Cricket World Cup title on Saturday, Prime Minister Narendra Modi congratulated the team and said it was an inspiration for the entire country. He said the team had made the nation proud with its “phenomenal attitude”.

Pakistan had scored 307/8 in 50 overs. India achieved the target in the penultimate over of the match with just two wickets in hand. Sunil Ramesh’ scintillating 93 runs in 67 balls and skipper Ajay Reddy’s 62 in 60 balls guided India to win with a over to spare.

Prakash and Venkatesh opened in grand style and gave India a flying start. They managed the scoring rate at 10 per over. Venkatesh scored 35 in 32 balls, while Prakash scored 44 in 42 balls.

“Congratulations to our cricket team for winning the 2018 Blind Cricket World Cup! They make the nation proud and inspire every Indian with their game as well as phenomenal attitude. True champions!” Modi said in a tweet.

Watch this video to know some mind blowing facts about Odisha 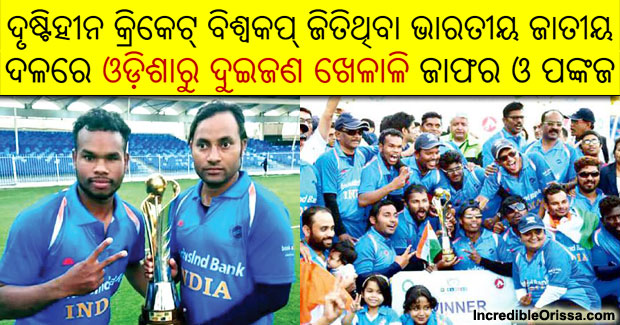