Amit Rana, a 27-year-old youth from Odisha has been making generators sets by assembling scraps of motor vehicles. He is from Patnagarh in Balangir district.

This idea dawned on him in his welding workshop he opened recently to start his own business. Amit used to observe the functioning of high-end zero-noise generators that were installed at big offices and business establishments.

Since he did a course on electrical trade from an industrial training institute, he made an attempt to manufacture low-cost generators by collecting spare parts from tractors and other vehicles. He made several experiments and came out with a final product after a year of research and trials in his workshop.

“I used to wonder why the generators having 20 kw capacity cost Rs 5 lakh. I knew that the mechanism is same and just because of brand name the generators’ cost was high. I started purchasing scraps from Sambalpur and started integrating them,” said Amit.

He has already made five generators and sold four of them at a cost of Rs 1.50 lakh each. “I spent Rs 1.30 lakh. It involved the cost of new dynamo and electrical fittings, bore remaking, painting and scraps and design. I am getting very good feedback from the users,” he said.

Sunil Meher, Amit’s co-worker, said the product can be a hit with small business establishments and small factories that require 24-hour power.

CHECK: World’s largest Rakhi made by Odisha students with Rice 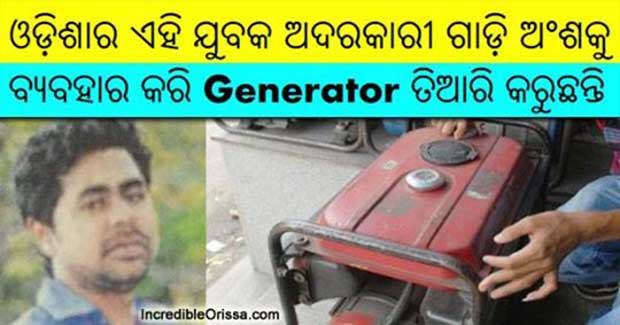