Ollywood actor Pintu Nanda joined the Bharatiya Janata Party (BJP) on Monday in the presence of its State president KV Singh Deo at the party office.

He said that, he is inspired by the ideology of the BJP’s prime ministerial candidate Narendra Modi and would work for development of the people in the State.

Pintu Nanda is the latest in a fast lengthening list of Ollywood stars taking the political plunge in the last few days. 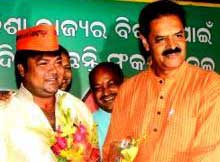 It may be noted that Sritam Das and Pinky Pradhan had joined the BJP a few days back.

It all started with Anubhav Mohanty, the biggest catch so far, joining the Biju Janata Dal (BJD) a few weeks ago amid speculation that he could be fielded as the ruling party candidate in the Cuttack Lok Sabha constituency.

He was soon followed into the BJD fold by Papu Pam Pam, the popular film and television comedian. On the other side of the political divide, yesteryear stars Bijay Mohanty and Aparajita Mohanty, joined the Congress.