42 girls from mostly poor Kurmi families from Odisha will tie the knot with Patidar men in Gujarat at a mass marriage ceremony on October 16.

The selection of the eligible Patel bachelors was done at a two-day ‘swayamvar’, organised by the Samast Patidar Samaj (SPS) in Katargam area of Surat, that ended Saturday.

Girls were in great demand as 5,000 Patel men had queued up in the hope of finally finding a bride, mostly belonging to families of Odia workers working in textile units in Surat.

ALSO READ: First women in Odisha who have succeeded in different tough fields

Patels in Surat in Gujarat are building matrimonial alliances with Kurmis – their brethren in other states – to help Patel men find brides which are difficult to find within the community plagued by a skewed sex ratio.

Two years ago, Surat wing of the SPS began to organise marriages of Odia women with the Patels in Surat. In the first year, seven Odiya women married Patels. In the second year, it rose to 22. This year, 42 women from different districts in Odisha came to Surat to choose their grooms.

On Saturday, all 42 girls had found suitors giving a flying start to the `Beti Roti’ tradition propagated by Gujarati Patidars with Kurmis in other states. 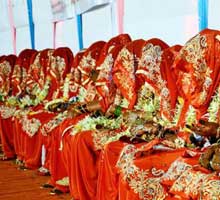 Parents of girls will be spared all expenses and a lavish wedding feast will be sponsored by moneyed Patels who will also gift Rs 2 lakh worth household articles to each newly-wed couple.