The 10th edition of International Olympiad on Astronomy and Astrophysics (IOAA) will be organized by India from 9th to 19th December 2016 at National Institute Of Science Education and Research (NISER) in Bhubaneswar, Odisha.

It is an annual astronomy competition for high school students. It is one of the international science olympiads. The Olympiad was founded from a dissidence inside the International Astronomy Olympiad, in order to increase the scope of the organization.

The IOAA 2016 logo is designed to bring out India’s rich cultural heritage as well it’s commitment to modern science. The radio antenna in place of letter “I” represents Giant Metrewave Radio Telescope (G.M.R.T.), which is located in western India, 90km from the city of Pune. GMRT is the world’s largest telescope at metre wavelengths. It consists of 30 dishes, spread in a circle of 17km in radius, with an aperture of 45m each. The spoked wheel in place of letter “O” represents the famous Sun temple of Konark. This temple is a world heritage site located about 50km away from Bhubaneswar and is built in shape of a 24 wheeled chariot of the Sun. 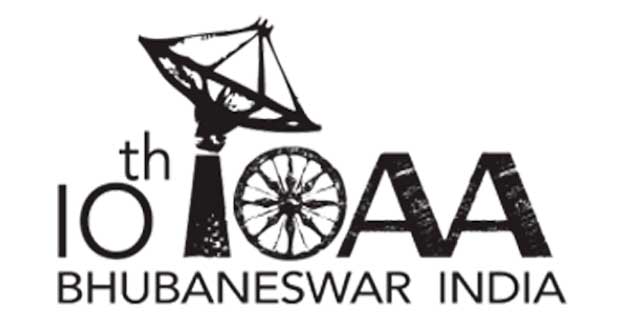