The 11-day-long Dhanu Jatra or Dhanu Yatra, believed to be the world’s largest open air theatre show, began in the west Odisha town of Bargarh on Friday.

With the central theme of the festival borrowed from the ‘Krishna Leela and Mathura Vijay’, the enactment of Day One began with wedding of Devaki with Basudev in the absence of Devaki’s brother and scion of Mathura, King Kansa.

Kansa dethrones his father Urgasen and takes over the rein marking beginning of his tyrannical rule. The joy of his accession to throne for the demon King proves short-lived. A divine voice warns Kansa of his impending death at the hands of the eighth child born breaking loose his temper and wrath. The warning is enough for Kansa to put his sister Devaki and her husband Basudev in jail.

Dhanu Jatra will draw to an end with the death of the mythical character.

Odisha is considered as the land of colourful fairs and festivals. There are 13 festivals in 12 months of a year. In this plethora of festivals, Dhanu Jatra of Bargarh in Odisha is remarkably distinguished from rest in sense, style, grace and grandeur. It also happens to be a great mass festival.

Every year in the month of Sagittarius, Dhanu Jatra is celebrated for eleven days of the month from the 5th day of the bright fortnight till the full moon day. It is believed to have started after harvesting season of 1947-48 soon after India’s independence as a reflection of joyous atmosphere in the society for the end of British misrule. Since then it has become more popular all over the world with every passing year.

During the Dhanu Jatra, Bargarh city, about 330-km from Bhubaneswar, becomes Mathura, the river Jeera becomes river Yamuna and Ambapalli situated on the other side of Jeera becomes Gopapura.

For all the eleven days, Bargarh city is transformed into a very big stage. The story of Maharaja (king) Kansa, his death and different acts of Lord Sri Krisha are enacted in 14 main places in Mathrua and 4 main places in Gopapura. Various episodes are organised at various places from sacred centres like temples to public places like ponds, rivers, cultural and commercial centres, transforms the entire locality into an open-air stage for the live show.

All the people, including lakhs of outsiders, paying visit to the festival, become actors of the drama either assuming or pretending to be the subjects of Maharaja Kansa at Mathura and as friends or devotees of Lord Sri Krishna at Gopapura.

During Dhanu Jatra festival Kansa can punish people with penalty for their mistakes. Biju Patnaik, the former chief minister of Odisha was fined once along with his ministers. 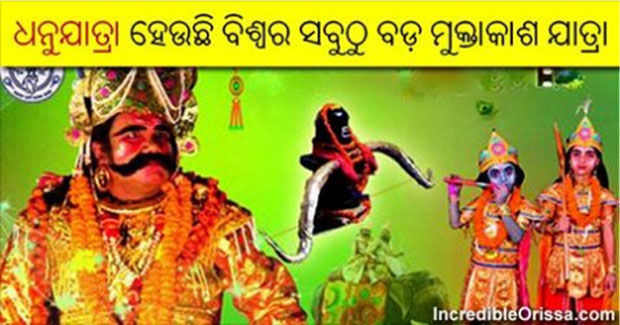