Starting off with his famously recited poem Toh Zinda Ho Tum from his superhit film Zindagi Na Milegi Dobara, Akhtar’s husky baritone was enough to get the audience screaming for more. He was then greeted by loud applause as he broke into his first track, Sinbad the Sailor from his musical hit movie Rock On!

From there on, the hits didn’t stop and Akhtar’s anecdotes about the songs kept the audiences engaged. A sea of over 30,000 people welcomed him with a roaring cheer as he took the stage with his accompanying talents.

He won the audience over complete with his playful antics. Senorita and Gallan Goodiyan were both songs the audiences were waiting eagerly for and were not disappointed when Farhan began singing them with accompanying female vocals.

The night came to an end with the final song – title track of ‘Rock On!!’ which the audiences were waiting in anticipation for. Farhan thanked the crowd who were chanting his name and said he always felt at home in Bhubaneswar and looks forward to performing here every time. 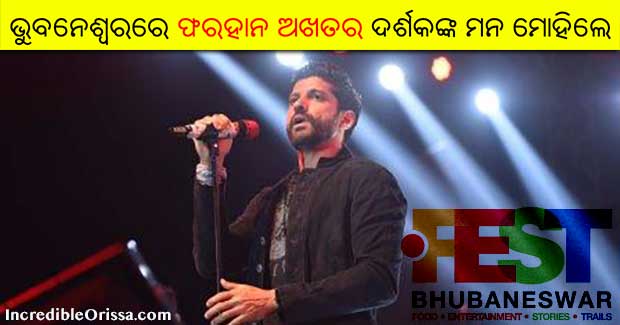