Mudhi (puffed rice) of Odisha will be promoted globally under the Centre’s ‘Make in India’ flagship programme.

It is among 12 traditional dishes selected from different states of India. The popular snack of Odias, will soon satiate global taste buds.

India is known for its traditional foods, whose manufacturing is mostly confined to the unorganized sector. The scheme has been launched by the Centre to make these popular across the world.

The food project will be handled by the National Institute of Food Technology Entrepreneurship and Management (NIFTEM). It will ensure uniform and hygienic mass production of these food products.

“Through this programme, we would make India the ‘Food factory of the world’ and capture the global food market,” said vice-chancellor of NIFTM, Ajit Kumar.

The other dishes of India that have been selected to be launched globally include Gushtaba of Kashmir, chicken curry of Punjab, Khaakhra and Khandvi of Gujarat, Bamboo steam fish of south India, Vada and Medhu Vada of south India, Khaja and Inarsa of Bihar and Kabab of Uttar Pradesh and Puran Poli of Maharashtra. 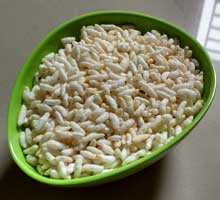 The Intellectual Property Rights cell of Orissa University of Agriculture and Technology (OUAT) had got geographical indication (GI) registration for ‘Mudhi’ in 2008.

Mudhi or puffed rice is mostly consumed in north Odisha. It is also popular across the country under different names. Bhelpuri, Jhalmudhi, Uggani, Mandaki and Parmal are some of the snacks made from Mudhi.