In the final, she defeated fourth seed and all India rank 29, Ashrita Nagpal, from Karnataka, 6-3, 2-6, 6-2. Rutuparna gained 50 ranking points by winning the tournament.

Earlier in the semifinals, she thrashed second seed Rachana Reddy (AP) 6-2, 6-3. This was the 13th singles and 21st overall AITA title for Bhubaneswar girl Rutuparna Choudhury, who is a student of KIIT International School. 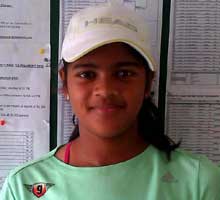 She is now occupying the 25th position in the AITA U-14 girls ranking list.