The handbook and the web platform, prepared by the Odisha Renewable Energy Development Agency, were released by Naveen. He said it would be “useful in making the Rooftop Solar Programme easily accessible to the common citizens”.

Science and technology minister said: “The good thing in the rooftop solar programme is that individual consumers can invest money for the installation of the solar power system on their house rooftop. They can use solar power and also sell the surplus one to the state government through Net-Meter.”

The grid-connected rooftop programme is primarily meant for consumers of utility power. The consumers can install small solar units on their rooftops and consume the generated solar power during the daytime. Excess power, if any, can be exported to the grid through their service cables.

The exported power is metered on a special type of meter called Net-Meter, which is provided by the respective power distribution companies. In this manner, the consumer can reduce his or her consumption of utility power by using their own solar power and simultaneously can get a reduced bill on account of export of solar power to the grid, said an official release.

ALSO READ: Yoga University to come up in Odisha within 2 years: Baba Ramdev 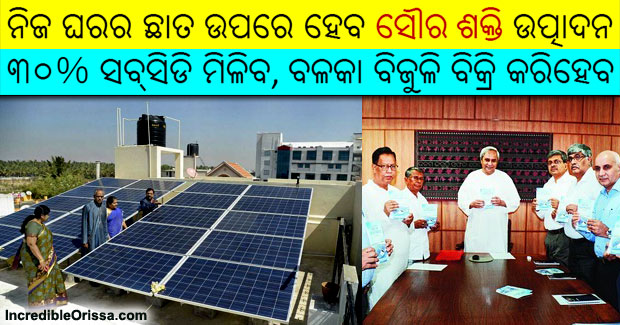